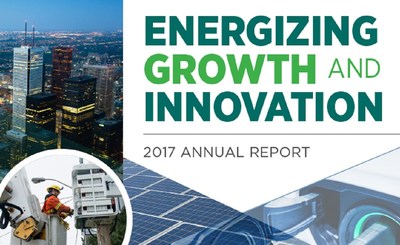 Toronto Hydro continues to be among the leading local distribution companies in the delivery of Conservation and Demand Management (CDM) programs. Last year, the utility launched the PowerLens® portal to help customers better understand their home's electricity consumption and how they can improve their conservation efforts. Toronto Hydro's CDM programs and initiatives reduced summer peak demand by 43 MW and led to an estimated energy savings of 353 GWh, an increase of 29% since 2016.

The company's strong financial performance resulted in a $156.5 million net income after net movements in regulatory balances, and is a reflection of its commitment to customer service and operational excellence.

"In 2017 we produced strong financial results while adapting to the evolving needs and demands of our growing city. Our focus remains on investing in infrastructure, enhancing our customer service tools and in our commitment to safety and environmental sustainability."

Toronto Hydro owns and operates the electricity distribution system for Canada's largest city. A leader in conservation and demand management, it has 769,000 customers located in the city of Toronto and distributes approximately 18% of the electricity consumed in Ontario.