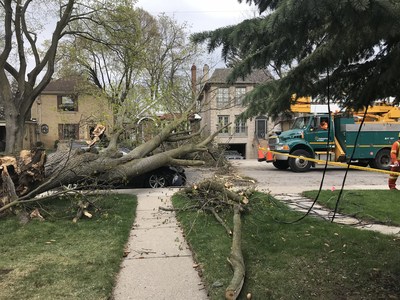 Hundreds of powerlines were brought down during a May 4, 2018 windstorm in Toronto (CNW Group/Toronto Hydro Corporation)

TORONTO, May 15, 2018 /CNW/ - A powerful windstorm swept through Toronto on May 4, ripping down trees and powerlines as it moved through Southern Ontario. At the peak of the event, 68,000 customers were without power in the City of Toronto and Toronto Hydro received hundreds of emergency calls about downed powerlines.

As Powerline Safety Week runs from May 14 to 18, and comes on the heels of one of the worst weather events since the 2013 ice storm, we're taking this opportunity to remind customers about the dangers of powerlines.

During widespread outages when severe damage has occurred to our system, crews work around the clock to restore power as quickly and safely as possible. Still, repairs of this nature can be lengthy and it can take time – sometimes days – for crews to get to every downed wire.

That's why customers should always treat downed powerlines as live, and should never attempt to move a wire out of the way or move a tree branch off of a wire. Powerlines are dangerous – even if they don't look like it. Unfortunately, a Hamilton man was electrocuted during the storm, and it's suspected he attempted to move downed lines out of the roadway.

We advise customers to stay back at least 10 metres from downed wires and to report them immediately to Toronto Hydro or 911. Learn more about powerline and other electrical safety tips at torontohydro.com/safety.

"Powerline Safety Week is a yearly campaign, but it's especially timely following the recent windstorm. As we saw, understanding the dangers associated with powerlines is literally a matter of life or death. We want to prevent electrical accidents from occurring by arming people with the necessary information to stay safe around our equipment."
-     Tori Gass, Media Relations Specialist, Toronto Hydro