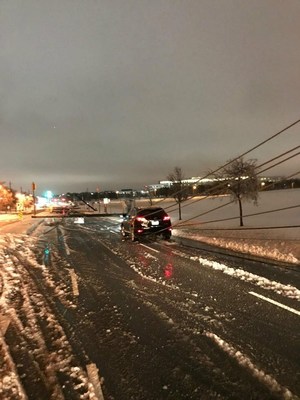 April storm knocked out power to 44,000 customers in a span of five hours

TORONTO, April 16, 2018 /CNW/ - Toronto Hydro's electrical grid was hammered by Mother Nature late Sunday evening and into Monday morning, but thanks to fast work by crews, the large majority of outages were restored within a matter of hours.

Preparations for this storm began as early as Tuesday of last week, as we knew it had the potential to severely impact our system. On Saturday, we had a large number of additional crews available – with more on standby – as well as extra staff in the control room and our call centre.

On Sunday evening, strong winds, which at times were recorded at nearly 100 km/h, pulled down trees and powerlines causing scattered outages across the city. Icy conditions, heavy rain and persistent wind made restoration efforts unsafe in some situations and slowed down restoration efforts.

Clean-up and restoration efforts will continue until all customers are restored.

"We appreciate everyone's patience as we work to restore power around the city. The storm was a disastrous combination of weather events across southern Ontario and caused extensive damage to trees, property and our system. We're focusing our efforts on restoring areas that will bring on the most customers the fastest with safety as our top priority."
-       Ben LaPianta, Executive Vice-President and Chief Customer Care, Electric Operations and Procurement Officer

Toronto Hydro owns and operates the electricity distribution system for Canada's largest city. A leader in conservation and demand management, it has 766,000 customers located in the city of Toronto and distributes approximately 20% of the electricity consumed in Ontario.