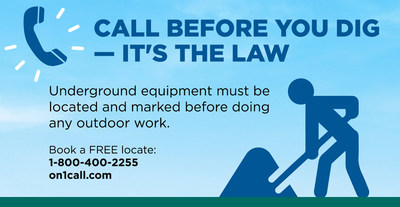 TORONTO, April 3, 2018 /CNW/ - The return of warm weather means an increase in landscaping and construction projects around Toronto. It can also mean an increased risk of underground cable strikes.

As April is Dig Safe Month, we're urging homeowners and contractors to make sure they're taking the right steps to avoid digging into underground electrical cables or other buried utilities.

Each time a dig-in happens, there's a real safety risk to the people involved as contact with a live powerline can cause severe injuries and, in some cases, death. It's in everyone's interest to follow safety standards but more than that, it's the law as stated by the Ontario Occupational Health and Safety Act.

Our data shows that the majority of dig-ins are caused by contractors using heavy machinery, such as excavators. Homeowners should make sure their contractor has contacted Ontario One Call – a free service that marks the location of underground utilities. If doing work on their own, homeowners are responsible for calling Ontario One Call before putting any shovels into the ground.

"Before starting any work around the house, it's important to find out what's underground. Whether it's a homeowner or a contractor, the first step is to contact Ontario One Call to have them locate any buried utilities."
- Tori Gass, Spokesperson, Toronto Hydro

Toronto Hydro owns and operates the electricity distribution system for Canada's largest city. A leader in conservation and demand management, it has 768,000 customers located in the city of Toronto and distributes approximately 19% of the electricity consumed in Ontario.