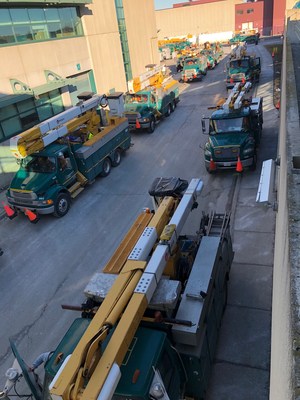 Winter Storm Riley hit the Eastern United States on early Friday morning with heavy rain and gusting winds causing more than 1.6 million customer power outages. Our crews are travelling to the New York area to provide emergency assistance and help restore power to people dealing with the aftermath of the storm.

Con Edison made a formal request for storm assistance through the North Atlantic Mutual Assistance Group (NAMAG) ­– which we're a part of – and they accepted our formal storm assistance proposal yesterday. Crews are now driving to the New York area and the trip is expected to take approximately 12 to 14 hours. They departed from our Toronto location at around 8 a.m. today.

"We were lucky to be spared from the severe winter storm that caused wide-spread damage in the Eastern United States. When we got the call for help from several U.S. utilities, we mobilized as soon as possible and our offer to help was accepted by Con Edison in New York. Our crews are now on their way to help with power restoration efforts."

ABOUT TORONTO HYDRO
Toronto Hydro owns and operates the electricity distribution system for Canada's largest city. A leader in conservation and demand management, it has 766,000 customers located in the city of Toronto and distributes approximately 20% of the electricity consumed in Ontario.