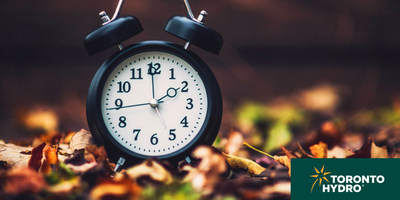 Clocks turn back an hour this weekend to mark the end of Daylight Savings Time. Toronto Hydro is reminding drivers, pedestrians and cyclists to use extra caution on the roads during this time. (CNW Group/Toronto Hydro Corporation)

TORONTO, Nov. 3, 2017 /CNW/ - This weekend marks the end of Daylight Savings Time, with clocks turning back an hour. It's also a time we urge drivers, pedestrians and cyclists to use extra caution on the roads — especially in work zones — as studies show pedestrians are three times more likely to be killed by vehicles during rush hour in the weeks following the fall time change.

As we want to keep the public safe — along with our crew members — we're reminding everyone that if you see Toronto Hydro crews working on city streets, slow down, pay attention and stay a safe distance away. Workers are not only dealing with traffic conditions, but also dangerous electrical equipment. Respect the orange cones that denote safe distances between road traffic and crews, and watch out for cyclists and pedestrians that may be rerouting around our trucks.

"Our crews take precautions to stay safe while working on city streets, but we rely on drivers, pedestrians and cyclists to do their part as well. With an increase in traffic incidents at this time of year, we want everyone to take their time on the roads, especially around our work zones."
- Tori Gass, Spokesperson, Toronto Hydro