Utilities along eastern seaboard are preparing for effects of Hurricane José Tampa Electric Company released our crews yesterday afternoon, and they have now been dispatched to the Long Island area, which is expected to feel the effects of Hurricane José when it brushes past the eastern seaboard as a tropical storm on Tuesday or Wednesday.

During their time in Florida, our crews helped with a variety of tasks including patrols, pole replacements, transformer replacements and service work. In one assignment, they restored power to approximately 184 units in a large trailer park.

They left the Tampa area this morning and expect to arrive in Long Island sometime on Tuesday evening.

"This year's hurricane season is proving to be particularly devastating. While there's still work to be done in Florida, the impending arrival of high winds and rain in Long Island means our crews are being diverted to that area to help prepare for potential outages." 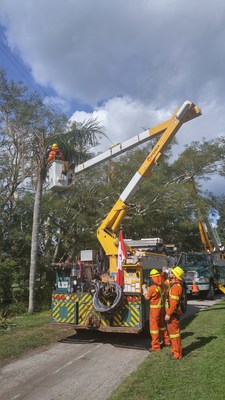