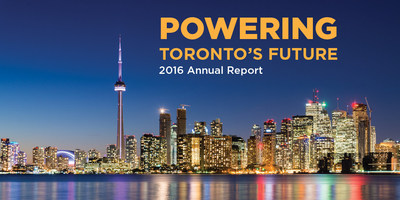 Utility continues to provide improved service while investing in the future

TORONTO, May 12, 2017 /CNW/ - Toronto Hydro Corporation has released its 2016 Annual Report showing the organization is continuing to provide reliable and high-quality service while investing in the future of Toronto's electricity system.

The report shows that Toronto Hydro had a highly successful year, exceeding all of its key performance targets, resulting in a $151.4 million net income.

Toronto Hydro continues to make much-needed investments to help ensure a strong, stable electrical grid in Toronto. As a result, since 2010, the average number of service interruptions has improved by 21% and the average duration of interruptions is down by 26%. In 2016, the company invested $551.7 million to renew aging infrastructure, address reliability and safeguard its electricity system against extreme weather events.

Toronto Hydro is a leader in the delivery of CDM programs to help customers conserve energy, save money and help the environment. It delivered the largest Conservation and Demand Management (CDM) savings ever in Ontario, with an estimated savings of 273.2 GWh – equivalent to taking more than 36,000 homes off the grid.

"I'm proud of the achievements Toronto Hydro made in 2016. We performed well financially while continuing to make important investments in the future of our electricity system. We were able to accomplish this while improving service reliability, enhancing customer care and demonstrating commitment to sustainability."