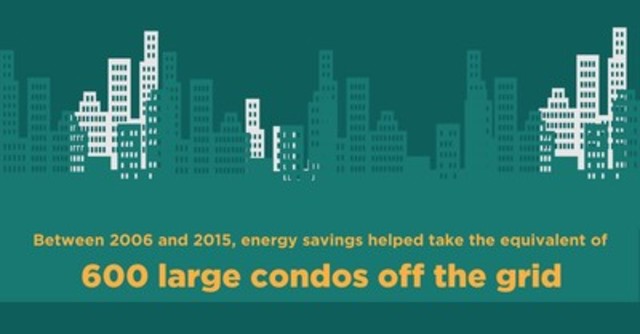 Toronto Hydro customers have helped take the equivalent of 600 large condos off the grid by reducing their electricity use. They’re encouraged to continue this commitment to conservation by participating in Earth Hour tonight. (CNW Group/Toronto Hydro Corporation)

Ten years after the inaugural Earth Hour, our latest conservation numbers show that customers are making a concerted effort to save energy year-round.

In fact, according to our recent Twitter poll, 54% of people say they've become smarter about their electricity use habits in the last 10 years. From 2006-2015, Torontonians achieved 1,756 gigawatt hours (GWh) in total energy savings, the equivalent of taking 600 large condos off the grid. Those savings have helped the city avoid 1.1 million tonnes in greenhouse gas (GHG) emissions, which is the equivalent of taking 34,000 cars off the road.

To maintain those positive energy use trends, and to show support for Earth Hour, customers can safely go "off the grid" by turning off all non-essential lighting, appliances and devices for the entire hour. Remember, if using candles as a light source, do not leave them unattended.

For tips to help you save energy during Earth Hour and throughout the year, visit torontohydro.com/conservation.

"We want to congratulate our customers for their year-round commitment to reducing their electricity use. We encourage everyone who's able to participate in this year's event to show their support for Earth Hour and turn off their lights on Saturday between 8:30 p.m. and 9:30 p.m."

Earth Hour is a global environmental initiative in partnership with World Wildlife Fund (WWF), which asks individuals, businesses, governments and communities to turn off their lights to show their support for environmentally sustainable action.